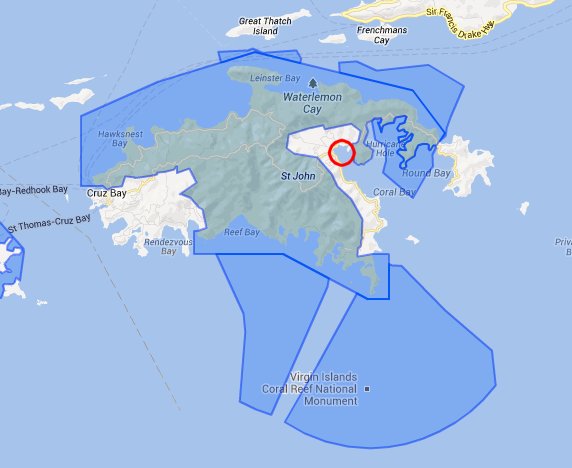 The waters of Hurricane Hole are particularly precious and are featured in this slide show from the U.S. Geological Survey, Southeast Ecological Science Center:

From the National Parks Service:  “The Virgin Islands Coral Reef National Monument is located in the submerged lands off the island of St. John in the U.S. Virgin Islands. The island of St. John rises from a platform that extends several miles from shore before plunging to abyssal depths in the deepest part of the Atlantic Ocean. The platform contains a multitude of species that exist in a delicate balance, interlinked through complex relationships that have developed over tens of thousands of years.

The National Monument designation furthers the protection of the scientific objects included in the Virgin Islands National Parks. The monument contains all the elements of a Caribbean tropical marine ecosystem and several threatened and endangered species. Humpback whales, pilot whales, four species of dolphins, brown pelicans, roseate terns, least terns, and the hawksbill, leatherback, and green sea turtles all use portions of the monument.”

The Marina is harmful to the bay, the adjacent waters of Hurricane Hole, and to the life in it.  Letters were sent to CZM from accomplished professionals with first-hand knowledge of Coral Bay and its marine environment.  These authors include: