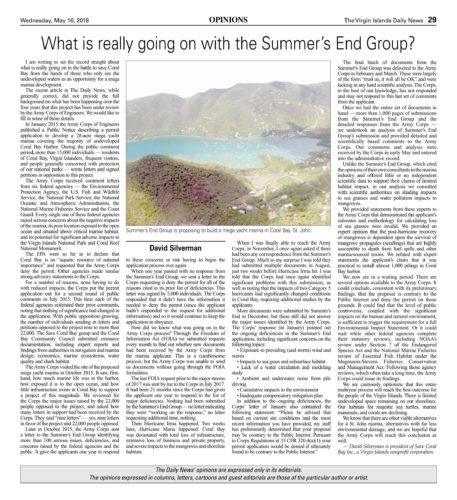 What is REALLY going on with the Summer’s End Group ?

I am writing to set the record straight on what is really going on in the battle to save Coral Bay from the hands of unscrupulous schemers who only see the undeveloped waters as an opportunity for mega marina development.  The recent article in the Daily News, while generally correct, did not provide the full background on what has been happening over the four years that this project has been under review by the Army Corps of Engineers.  We would like to fill in some of those details.

In January 2015 the Army Corps of Engineers published a Public Notice describing a permit application to develop a 28 acre mega yacht marina covering the majority of undeveloped Coral Bay Harbor.  The public outrage at such an inappropriate use of fragile environmental resources was unprecedented.  During the public comment period over 15 thousand individuals – residents of Coral Bay, Virgin Islanders, frequent visitors, and people generally concerned with protection of our national parks – wrote letters and signed petitions in opposition to this project.

The Army Corps received comment letters from six federal agencies – the Environmental Protection Agency (EPA), the US Fish and Wildlife Service (FWS), the National Park Service (NPS), the National Oceanic and Atmospheric Agency (NOAA), the National Marine Fisheries Service (NMFS) and the US Coast Guard (USCG).  Every single one of these federal agencies raised serious concerns about the negative impacts of the marina, its poor location exposed to the open ocean and situated above critical marine habitat, and its potential for significant adverse impacts to the Virgin Islands National Park and Coral Reef National Monument.  The EPA went so far as to declare that Coral Bay is an “aquatic resource of national importance” and requested that the Army Corp deny the permit.  Other agencies made similar strong advisory statements to the Corps.

For a number of reasons, none having to do with reduced impacts, the Corps put the permit application out for a second round of public comments in July 2015.  This time each of the federal agencies reiterated their prior comments, noting that nothing of significance had changed in the application.  With public opposition growing, the number of individuals sending in letters and petitions opposed to the project rose to over 22,000 people.  The Save Coral Bay group and the Coral Bay Community Council submitted extensive documentation, including expert reports and findings from authorities in navigation and marina design, economics, marine ecosystems, water quality and shark habitat.

The Army Corps visited the site of the proposed mega yacht marina in October 2015.  They saw, first hand, how much marine life was in the harbor, how exposed it is to the open ocean, and how little infrastructure exists in Coral Bay to support a project of this magnitude.  We reviewed for the Corps the major issues raised by the 22 thousand people opposed to the project, and asked how many letters in support had been received by the Corps.  They said “nine letters” – yes, 9 letters in favor of the project and 22 thousand people opposed to the project.

Later in October 2015 the Army Corps sent a letter to the Summer’s End Group identifying over 100 serious issues, deficiencies, and concerns raised by the federal agencies and the public.  They gave the applicants one year to respond to these concerns or risk having to begin the application process over again.

When one year passed with no response from the Summers End Group we sent a letter to the Corps requesting they deny the permit for all of the reasons cited in their prior list of deficiencies.  This letter was signed by five thousand individuals.  The Corps’ responded that they didn’t have the information they needed to deny the permit (since the applicant hadn’t responded to the request for additional information) and so they would continue to keep the application in abeyance.

How did we know what was going on in the Army Corps process ?  Through the Freedom of Information Act (FOIA) we submitted requests every month to find out whether new documents had been received by the Army Corps from the marina applicant.  This is a cumbersome process, but the Army Corps was unable to simply send us documents without going through the FOIA formalities.

The last FOIA request prior to the major storms of 2017 was sent by me to the Corps in July 2017.  It had been 21 months since the Corps had given the applicant one year to respond to the list of major deficiencies.  Nothing had been submitted by the Summers End Group – no letter indicating they were “working on the response”, no letter requesting additional time, nothing.

And then Hurricane Irma happened.  And two weeks later Hurricane Maria happened.  Coral Bay was devastated with total loss of infrastructure, extensive loss of business and private property, and severe impacts to the mangroves and shoreline habitats.

When I was finally able to reach the Army Corps, in November 2017, I once again asked if there had been any correspondence from the Summers End Group.  Much to my surprise I was told they had submitted multiple documents in August 2017, just two weeks before Hurricane Irma hit.  I was told that the Corps had once again identified significant problems with this submission, as well as noting that the impacts of two category five hurricanes had significantly changed conditions in Coral Bay, requiring additional studies by the applicants.

More documents were submitted by Summer’s End in December 2017 but these still did not answer the major issues identified by the Army Corps.  The Corps’ response (in January 2018) pointed out the ongoing deficiencies in the Summer’s End application, including significant concerns on the following topics:

In addition to the ongoing deficiencies, the Corps’ letter of January 2018 also contained the following statement: “Please be advised that based on current site conditions and the most recent information you have provided, my staff has preliminarily determined that your proposal may be contrary to the Public Interest. Pursuant to Corps Regulations at 33 CFR 320.4(a)(1) your permit application would be denied if ultimately found to be contrary to the Public Interest.”

The final batch of documents from the Summer’s End Group was delivered to the Army Corps in February and March of 2018.  These were largely of the form “trust us, it will all be OK” and were lacking in any hard scientific analysis.  The Corps, to the best of our knowledge, has not responded and may not respond to this last set of comments from the applicant.

Once we had the entire set of documents in hand – over 1000 pages of submissions from the Summer’s End Group and the detailed responses from the Army Corps – we undertook an analysis of SEG’s submission and provided detailed and scientifically based comments to the Army Corps.  Our comments and analysis were received by the Corps in early May and entered into the administrative record.

Unlike the Summer’s End Group, who cited the opinions of their own consultants in the marina industry and offered little or no independent scientific data to support their claims of limited habitat impact, in our analysis we consulted with scientific authorities on shading impacts to sea grasses and water pollution impacts to mangroves.  We provided statements from these experts to the Army Corps that demonstrated the applicant’s estimates and methodology for calculating loss of sea grasses were invalid.  We provided an expert opinion that the post-hurricane recovery of mangroves is dependent upon the survival of mangrove propagules (seedlings) that are highly susceptible to death from fuel spills and other marina sourced toxins.  We refuted with expert statements the applicant’s claim that it was practical to install almost one thousand pilings in Coral Bay Harbor.

We are now in a waiting period.  There are several options available to the Army Corps.  They could conclude, consistent with their preliminary findings, that the proposal is contrary with the Public Interest and deny the permit on those grounds.  They could find that the level of public controversy, coupled with the significant impacts on the human and natural environment, is sufficient to trigger the requirement for a full Environmental Impact Statement.  Or they could wait while other federal agencies complete their statutory reviews, including NOAA’s review under Section 7 of the Endangered Species Act and NMFS’ review of Essential Fish Habitat under the Magnuson-Stevens Fisheries Act.  Following those agency reviews, which often take a long time, the Army Corps could issue its findings.

We are cautiously optimistic that this entire multi-year process will reach the best outcome for the people of the Virgin Islands.  There is limited undeveloped space remaining on our shorelines.  Our habitats for majestic sea turtles, marine mammals, and corals are declining.  We know that there are other viable alternatives for a St John marina, alternatives with far less environmental damage, and we are hopeful that the Army Corps will reach this conclusion as well.