The image below is an 1833 painting by Frederik von Scholten of the “Carolina Plantation and Coral Harbor.”  The large buildings on the right are the main structures of the Emmaus Moravian Church (Church and Manse).  The road heading into the valley is the road we know today as “King Hill Road.”  These features are still very apparent today on the landscape of Coral Bay.

What is less apparent today is the collection of small habitations just to the left of the church and slightly downhill from it.  Some of these structures continued to stand through the latter part of the 20th century, as can be seen in the next photograph, from 1958. 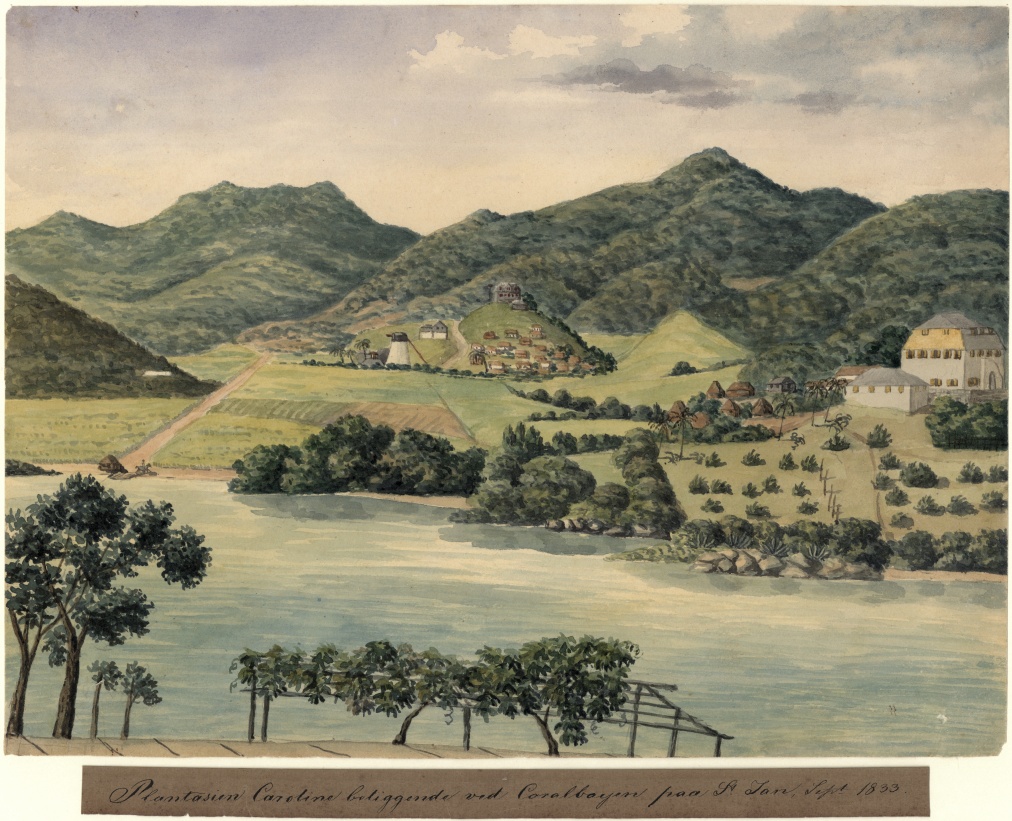 The photograph below was taken a few years after the construction of Centerline Road into Coral Bay.  The year is 1958 and a collection of small buildings to the left of the church and close to the road are apparent.  This collection of buildings was studied by historical archeologist Dr. Margaret Wood, in 2012.  Although the major hurricanes of the late 20th century had leveled most of the structures, she identified the building foundations and their function, as can be seen in the following drawing excerpted from her article ” Mapping the Complexities of Race on the Landscape of the Colonial Caribbean, United States Virgin Islands, 1770–1917 (Historical Archaeology, 2012, 46(4):112–134).

Dr. Wood identified the ruins of a village where enslaved Africans lived, an old kitchen, and an early 19th century school.  The structures corresponding to the village are less than 30 meters from Centerline Road. 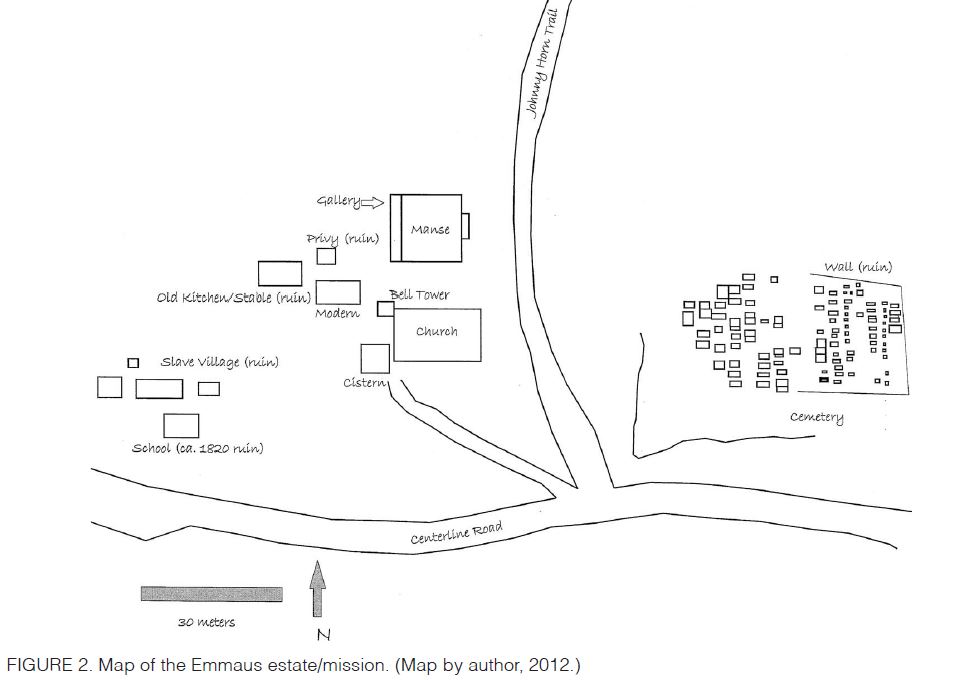 Dr. Wood wrote ” Like other plantation residential complexes, housing for the enslaved at Emmaus … was placed at a lower elevation but contiguous to the main house (Hall 1992:76). At Emmaus the slave village consisted of at least four structures and was located west of the mission house and church (Figure 2). The foundations of these structures were documented archaeologically, and a watercolor painting of the area shows a slave village in this location at least as far back as 1833. The remains consist of rubble-stone foundations built on terraced platforms with retaining walls. Only two of the foundations were complete enough to determine the dimensions of the structures; one measured 20 × 20 ft. and the other 40 × 20 ft. In the mid-19th century Emmaus was home to 48 enslaved people who must have lived in these four structures and shared the nearby kitchen/oven.”

The significance of these historical ruins was recognized in 2010 when the Virgin Islands Housing Finance Authority (HFA) purchased a five acre parcel of land from the Moravian Conference including the site of these ruins.  The filed map for that purchase cordoned off a “Greenbelt” enclosing the historic ruins, to ensure it would be protected from development.  A portion of that filed map, with the historic area and notation circled in green is shown below (the note states “Greenbelt parcel of 10F-1 is substandard and not a building lot.  It is to preserve existing ruins.”) 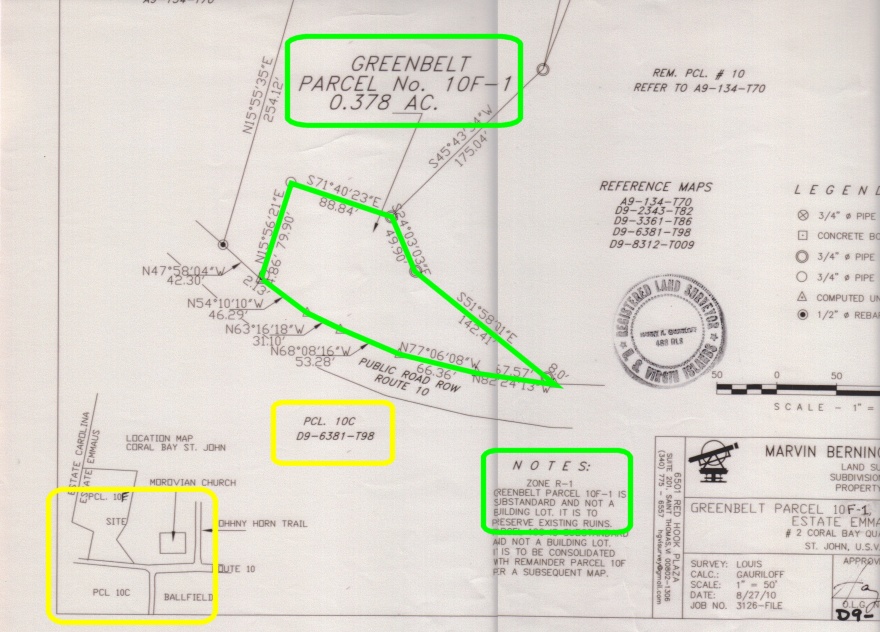 This map also indicates that the parcel directly across Centerline Road from the historic slave village ruins is Parcel 10C.  This is the parcel designated as the disposal site for 3,300 cubic yards of dredge spoil according to the documents filed for the Sirius Marina project.

The applicant, T-Rex St John, proposes to transport 3,300 cubic yards of dredged materials from the creek in Coral Bay, and deposit them over roughly one acre in the indicated parcel.  They estimate this will cover the parcel to a depth of approximately two feet.  The dredge disposal area is highlighted in the illustration below (in red) and its proximity to the historical ruins (in green) is immediately apparent.  In fact the distance between the ruins and the dredge disposal site is less than 125 feet.  Furthermore, the elevation of the historic ruins is approximately 25 feet, and the elevation of the disposal site is approximately 5 feet.  The road between the historic site and the disposal site (Centerline Road) did not exist until 1951.  So it is quite logical to assume that artifacts from the slave village may have found their way down the slope and ended in the lower elevations only 125 feet away. 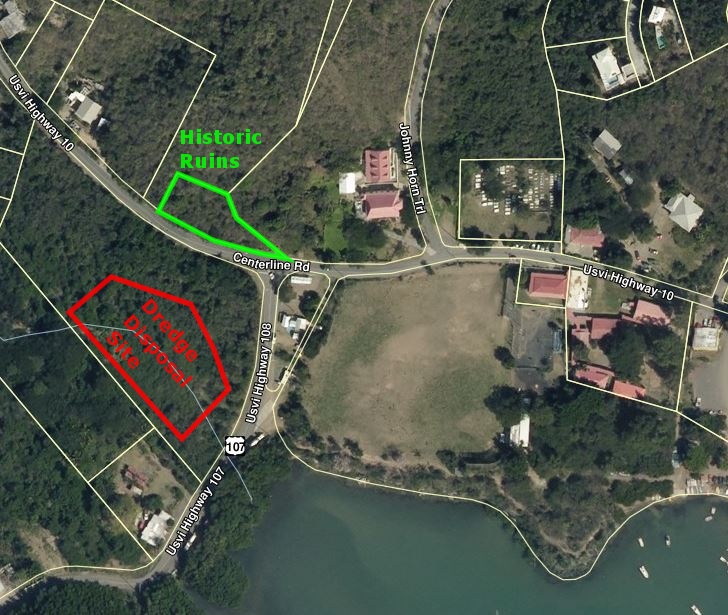 Returning to the original 1833 painting, it is clear how close these features were, in the eye of Frederik von Scholten.  This area is likely to be rich in historic artifacts which, pursuant to the National Historic Preservation Act and NEPA Public Interest Review, must be studied and inventoried before they are buried in up to two feet of dredge spoils. 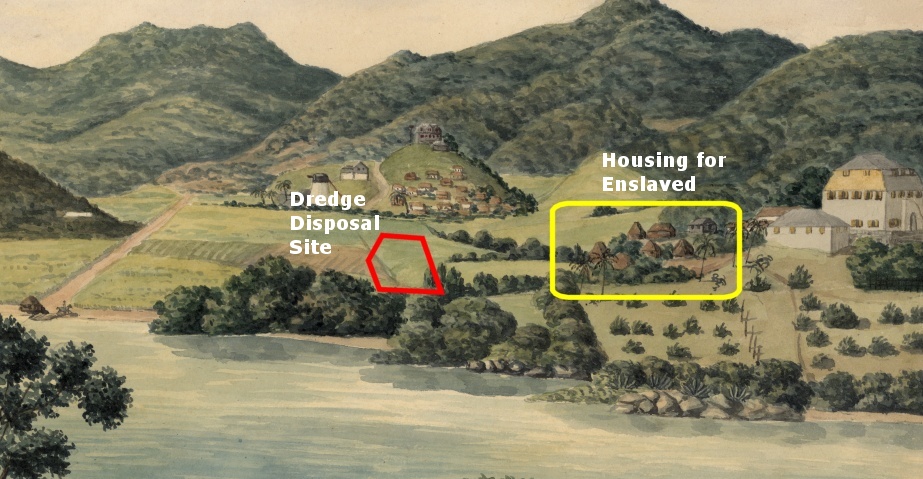