This is a 3-part Op-Ed feature published by the Virgin Islands Daily News (click on image for full screen – or read the text lower on this page). 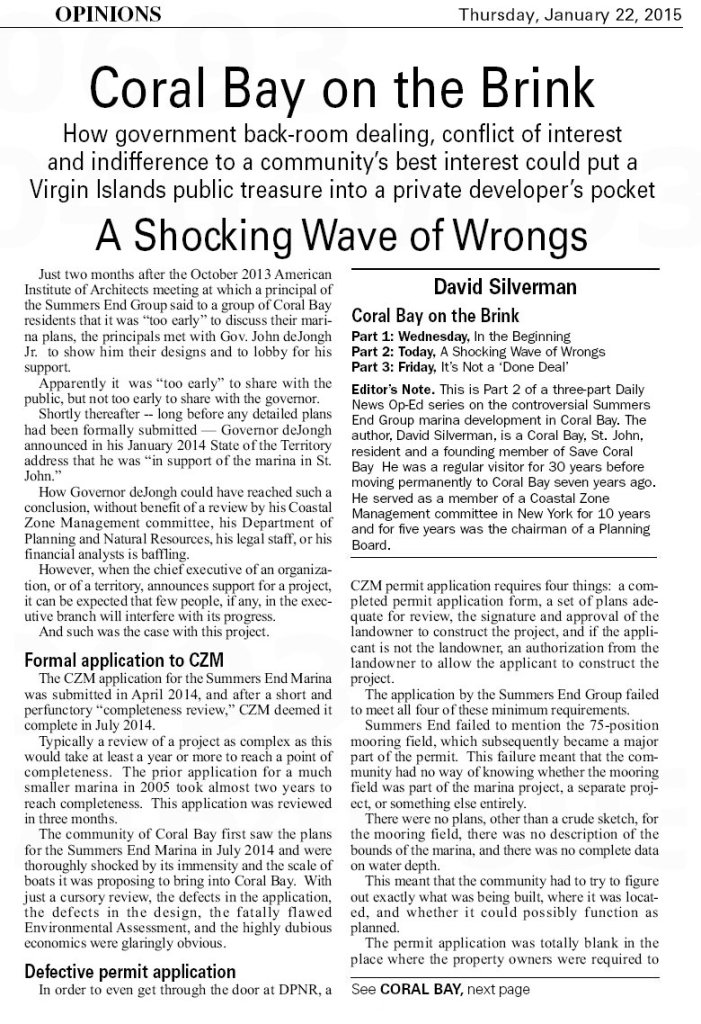 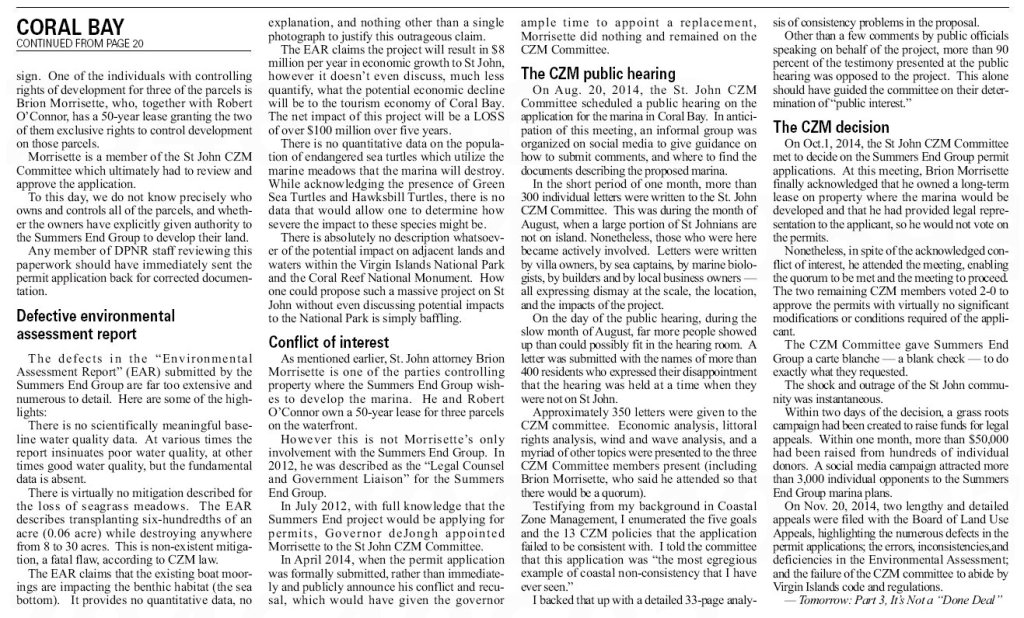 A Shocking Wave of Wrongs

Just two months after the October 2013 American Institute of Architects meeting at which a principal of the Summers End Group said to a group of Coral Bay residents that it was “too early” to discuss their marina plans, the principals met with Gov. John deJongh Jr.  to show him their designs and to lobby for his support.

Shortly thereafter — long before any detailed plans had been formally submitted – Governor deJongh announced in his January 2014 State of the Territory address that he was “in support of the marina in St. John.”

How Governor deJongh could have reached such a conclusion, without benefit of a review by his Coastal Zone Management committee, his Department of Planning and Natural Resources, his legal staff, or his financial analysts is baffling.

However, when the chief executive of an organization, or of a territory, announces support for a project, it can be expected that few people, if any, in the executive branch will interfere with its progress.

And such was the case with this project.

The CZM application for the Summers End Marina was submitted in April 2014, and after a short and perfunctory “completeness review,” CZM deemed it complete in July 2014.

The community of Coral Bay first saw the plans for the Summers End Marina in July 2014 and were thoroughly shocked by its immensity and the scale of boats it was proposing to bring into Coral Bay.  With just a cursory review, the defects in the application, the defects in the design, the fatally flawed Environmental Assessment, and the highly dubious economics were glaringly obvious.

The application by the Summers End Group failed to meet all four of these minimum requirements.

Summers End failed to mention the 75-position mooring field, which subsequently became a major part of the permit.  This failure meant that the community had no way of knowing whether the mooring field was part of the marina project, a separate project, or something else entirely.

There were no plans, other than a crude sketch, for the mooring field, there was no description of the bounds of the marina, and there was no complete data on water depth.

This meant that the community had to try to figure out exactly what was being built, where it was located, and whether it could possibly function as planned.

The permit application was totally blank in the place where the property owners were required to sign.  One of the individuals with controlling rights of development for three of the parcels is Brion Morrisette, who, together with Robert O’Connor, has a 50-year lease granting the two of them exclusive rights to control development on those parcels.

Morrisette is a member of the St John CZM Committee which ultimately had to review and approve the application.

To this day, we do not know precisely who owns and controls all of the parcels, and whether the owners have explicitly given authority to the Summers End Group to develop their land.

Any member of DPNR staff reviewing this paperwork should have immediately sent the permit application back for corrected documentation.

The defects in the “Environmental Assessment Report” (EAR) submitted by the Summers End Group are far too extensive and numerous to detail.  Here are some of the highlights:

As mentioned earlier, St. John attorney Brion Morrisette is one of the parties controlling property where the Summers End Group wishes to develop the marina.  He and Robert O’Connor own a 50-year lease for three parcels on the waterfront.

In July 2012, with full knowledge that the Summers End project would be applying for permits, Governor deJongh appointed Morrisette to the St John CZM Committee.

In March 2014, when the permit application was formally submitted, rather than immediately and publicly announce his conflict and recusal, which would have given the governor ample time to appoint a replacement,  Morrisette did nothing and remained on the CZM Committee.

On Aug. 20, 2014, the St. John CZM Committee scheduled a public hearing on the application for the marina in Coral Bay.  In anticipation of this meeting, an informal group was organized on social media to give guidance on how to submit comments, and where to find the documents describing the proposed marina.

In the short period of one month, more than 300 individual letters were written to the St John CZM Committee.  This was during the month of August, when a large portion of St Johnians are not on island. Nonetheless, those who were here became actively involved.  Letters were written by villa owners, by sea captains, by marine biologists, by builders and by local business owners – all expressing dismay at the scale, the location, and the impacts of the project.

On the day of the public hearing, during the slow month of August, far more people showed up than could possibly fit in the hearing room.  A letter was submitted with the names of more than 400 residents who expressed their disappointment that the hearing was held at a time when they were not on St John.

Approximately 350 letters were given to the CZM committee.  Economic analysis, littoral rights analysis, wind and wave analysis, and a myriad of other topics were presented to the three CZM Committee members present (including Brion Morrisette, who said he attended so that there would be a quorum).

Testifying from my background in Coastal Zone Management, I enumerated the five goals and the 13 CZM policies that the application failed to be consistent with.  I told the committee that this application was “the most egregious example of coastal non-consistency that I have ever seen.”

I backed that up with a detailed 33-page analysis of consistency problems in the proposal.

Other than a few comments by public officials speaking on behalf of the project, more than 90 percent of the testimony presented at the public hearing was opposed to the project.  This alone should have guided the committee on their determination of “public interest.”

On Oct.1, 2014, the St John CZM Committee met to decide on the Summers End Group permit applications.  At this meeting, Brion Morrisette finally acknowledged that he owned a long-term lease on property where the marina would be developed and that he had provided legal representation to the applicant, so he would not vote on the permits.

Nonetheless, in spite of the acknowledged conflict of interest, he attended the meeting, enabling the quorum to be met and the meeting to proceed.  The two remaining CZM members voted 2-0 to approve the permits with virtually no significant modifications or conditions required of the applicant.

The CZM Committee gave Summers End Group a carte blanche – a blank check — to do exactly what they requested.

The shock and outrage of the St John community was instantaneous.

Within two days of the decision, a grass roots campaign had been created to raise funds for legal appeals.  Within one month, more than $50,000 had been raised from hundreds of individual donors.  A social media campaign attracted more than 3,000 individual opponents to the Summers End Group marina plans.

On Nov. 20, 2014, two lengthy and detailed appeals were filed with the Board of Land Use Appeals, highlighting the numerous defects in the permit applications; the errors, inconsistencies, and deficiencies in the Environmental Assessment; and the failure of the CZM committee to abide by Virgin Islands code and regulations.