This section contains letters from people with first-hand knowledge about the effect of storms in Coral Bay.  Letters were received from the following individuals, among others, with detailed knowledge of local wind, wave, and weather patterns in Coral Bay harbor:

Any knowledge or research about hurricanes, backed up by real-life, recent experience in the Virgin Islands, confirms the simple fact that St. John is in an area of the world where there is always the threat of a hurricane.  Due to the direct exposure of Coral Bay to southeast winds, the proposed location of the SEG marina is the worst place on the island to attempt to build a marina.

The last major storms to strike the territory were Hugo and Marilyn. Future hurricanes are certain to occur.  Hurricane Hugo devastated Coral Bay Harbor in 1989. Hurricane Marilyn followed shortly afterwards, in 1995, with winds of 105 mph, and seas approximately 6 feet above normal high tide. 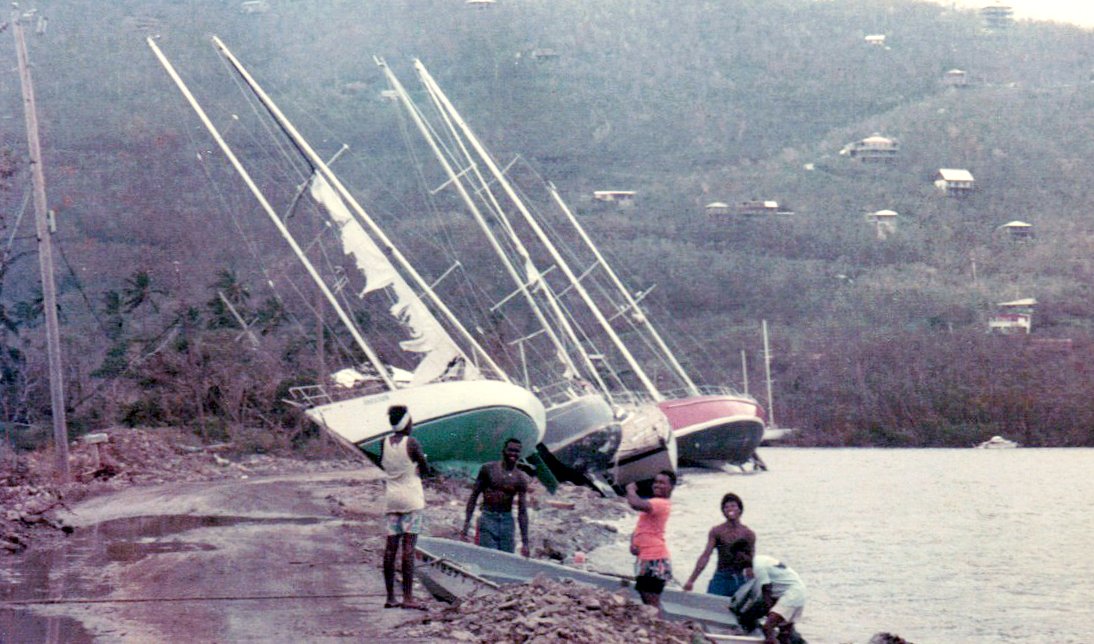 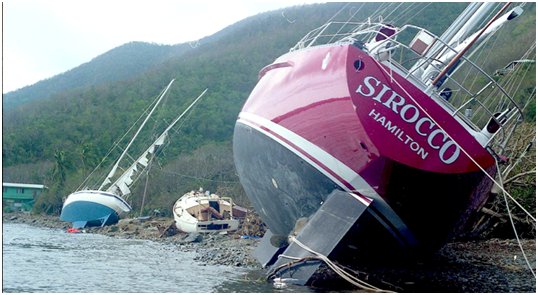 Hurricane Hugo severely damaged boats in Coral Bay Harbor in 1989, due to the exposure to southeast winds and seas.

From Wikipedia about Hurricane Hugo’s effect on St. Croix, 40 miles south:
The slower speed allowed Hugo to punish the island of St. Croix with the worst beating of any location along the hurricane’s destructive path.  At 2 am local time on September 18, Hugo’s eyewall struck St. Croix, bringing Category 4 winds, sustained at 140 mph (230 km/h).  The hurricane’s gusts were remarkably violent, and many residents witnessed tornado-like vortices barreling across the island as the hurricane raged about them.  A storm surge of 2–3 ft (0.61–0.91 m), topped by battering waves 20–23 ft (6.1–7.0 m) high, assaulted the coast, adding to the destruction.  Two people were killed on St. Croix, 80 injured, and 90% of the buildings were damaged or destroyed.  Damage estimates for St. Croix were astronomical, over $1 billion, and the island’s entire infrastructure was virtually wiped out.  Six weeks after the hurricane, only 25% of the public roads had been cleared, and only 25% of the island had power.