1. Introduction
The Army Corps is required to evaluate the cumulative impacts of the proposed action on the aquatic environment. Cumulative impacts are defined in 40 CFR 230.11(g) which reads:

(g) Determination of cumulative effects on the aquatic ecosystem.
(1) Cumulative impacts are the changes in an aquatic ecosystem that are attributable to the collective effect of a number of individual discharges of dredged or fill material. Although the impact of a particular discharge may constitute a minor change in itself, the cumulative effect of numerous such piecemeal changes can result in a major impairment of the water resources and interfere with the productivity and water quality of existing aquatic ecosystems.
(2) Cumulative effects attributable to the discharge of dredged or fill material in waters of the United States should be predicted to the extent reasonable and practical. The permitting authority shall collect information and solicit information from other sources about the cumulative impacts on the aquatic ecosystem. This information shall be documented and considered during the decision-making process concerning the evaluation of individual permit applications, the issuance of a General permit, and monitoring and enforcement of existing permits.

In this note we review the impacts to the portion of northeast Coral Bay Harbor locally known as “the creek.” This is the site where the applicant requests permission to dredge, install bulkheads seaward of the current shoreline, backfill the bulkheads with dredge material, and cap with a concrete apron.

Based on our knowledge of the natural conditions of the creek prior to late 20th century development, the impact of activities during the 20th century, and the proposed impacts stemming from this project, we believe that the cumulative impact is far greater than the incremental impact from this one project, and must therefore be taken into consideration by the Corps.

2. Proposed Activity – Direct Impacts
The detailed analysis of the proposed construction in the creek for the Sirius Marina has been documented elsewhere in these comments. Briefly, the applicant proposes to dredge approximately 1 acre to a depth of -6 feet, install approximately 800 feet of steel sheet bulkhead, partially seaward of the current shoreline and partially in a mangrove wetlands, discharge dredged materials into the open water and wetlands behind the bulkhead, and cap with a concrete apron, approximately 1 acre in size. These component activities are illustrated below: 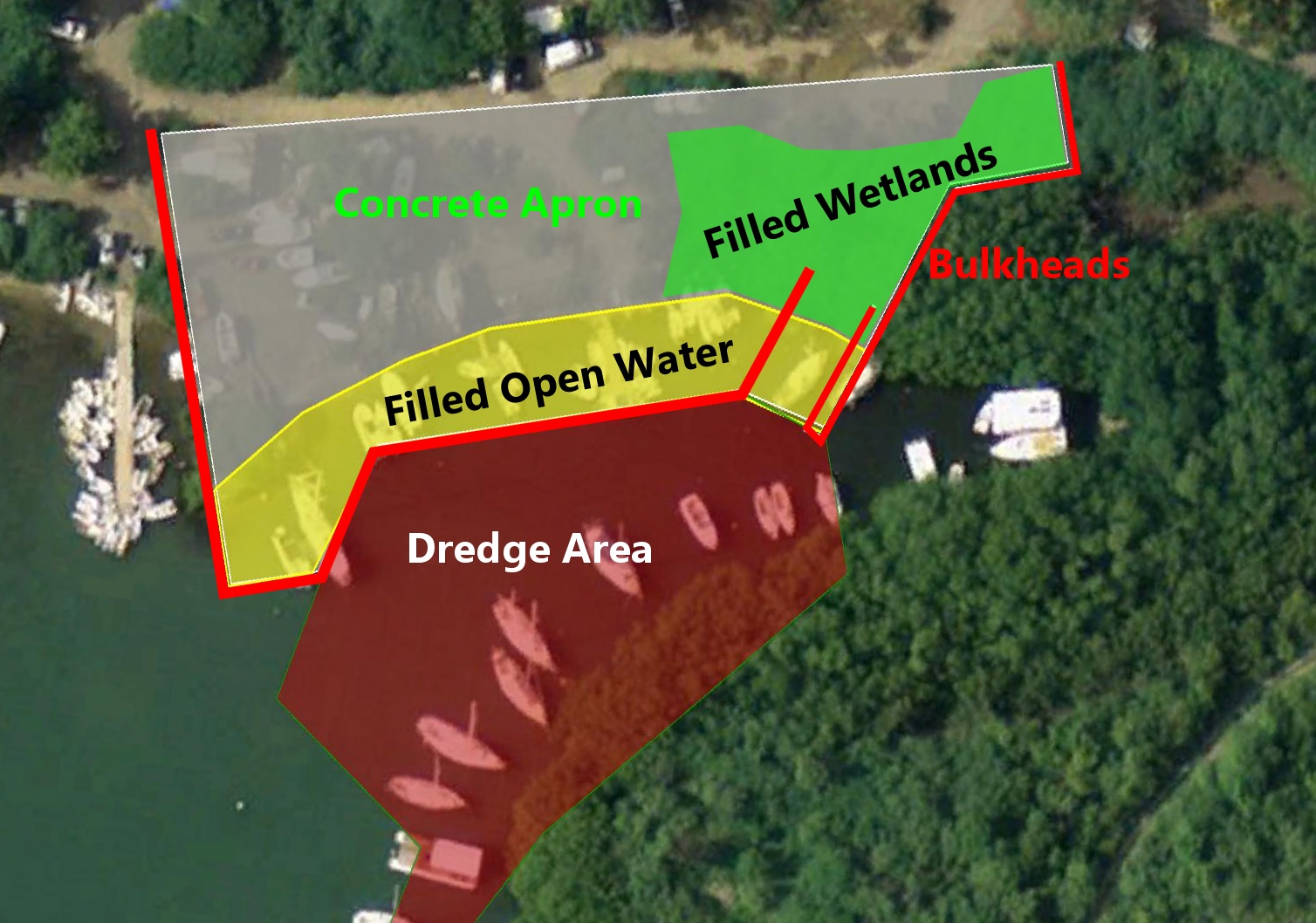 Figure 1: Proposed Development in the Creek

The key volumetric figures which quantify this development (according to the PN) are the following:

3. Condition of the Creek Prior to Development Impacts
We have assembled an archive of aerial and terrestrial photographs of Coral Bay, dating from the mid 20th century through the present. These photographs are our best primary evidence of the original shoreline location on the northern edge of the Creek prior to the fill operations of the 1970’s. The next two pages show aerial photographs of the northern shore of Coral Bay and the creek from 1946 and 1954. For each photograph we show the original image beside the same photograph with the open water of the creek outlined in turquoise and our best estimate of the fringing mangrove upland extent outlined in green. 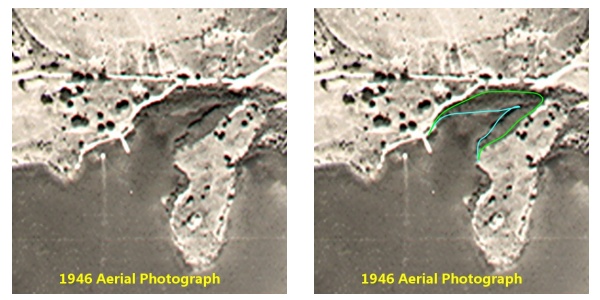 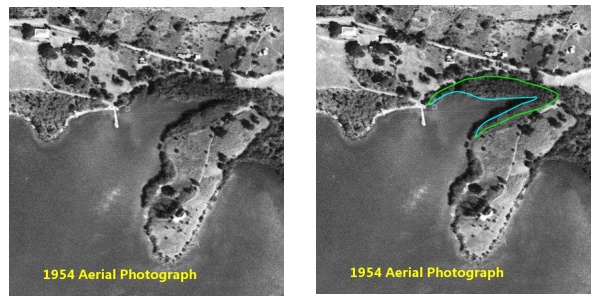 One additional photograph, taken from Bordeaux Mountain and looking into the creek, clearly shows the contour of the shoreline and the blue water which extends to the north beginning just east of the town dock, forming a small cove on the shoreline. This photograph was dated 1955. 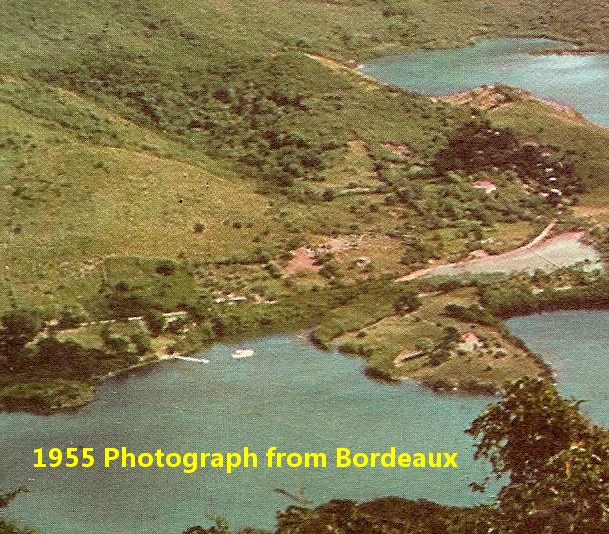 Figure 4: 1955 Photograph of North Coral Bay Harbor and the Creek 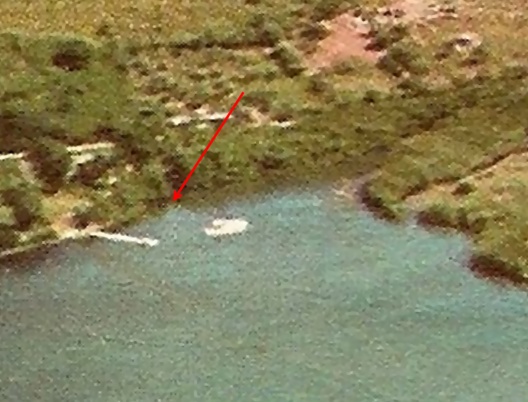 4. Illegal Filling of the Creek During Between 1955 and 1973
Between the time the previous photographs were taken (1955 and prior) and the present day (2015), a series of at least two non-permitted fill operations took place in the Coral Bay creek. We have documented the extent of this fill with a series of photographs comparing the present shoreline with the shoreline from the earlier photographs. We have also documented the local and federal response to the 1973 illegal fill in a series of newspaper articles from that time.
The first photograph is a modern aerial (2006) of the creek and in particular the northern shoreline (behind Coral Bay Marine and Skinny Legs Restaurant). 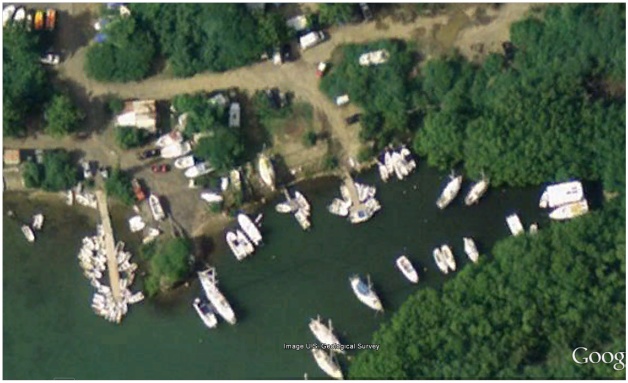 The next image is the same as the 2006 aerial photograph, however the boats in the water and two small floating docks have been removed to make the shoreline comparison easier to see. 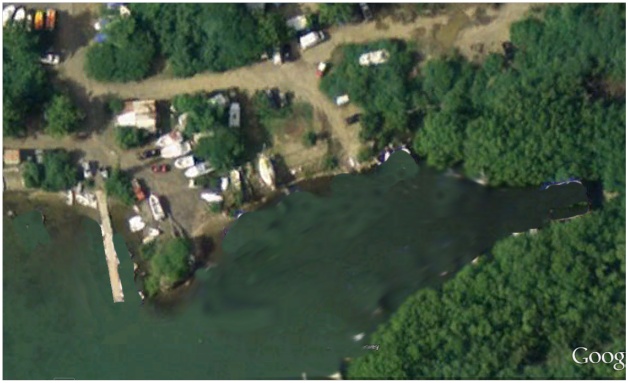 The next image is an enlargement of the 1954 aerial depicted earlier, covering the same region as the 2008 image, so that they can be overlaid for comparison. 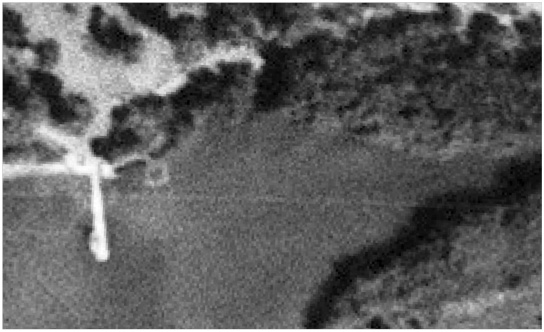 Using the previous image as the base, we have highlighted the apparent shoreline with a yellow line, and the open water shaded in blue. The original fringing mangrove wetlands extended landward of the yellow line as shown below, highlighted in green. 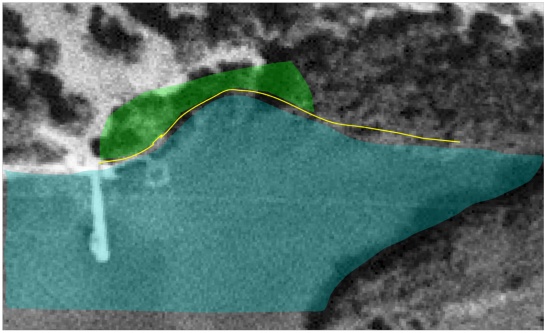 Figure 9: 1954 Photo With Water and Shoreline and Wetlands Highlighted

The next image takes the 1954 shoreline, open water and wetlands and superimposes these features on the 2006 photograph. It should be apparent that the easternmost extent of the creek has not changed over this period of time. The mangroves have grown, but the open water is in the same location and extent. The same is true of the open water to the west of the town dock – it hasn’t changed during this time period.

What has clearly changed is the shoreline and open water directly east of the town dock. The land has clearly been extended into the creek the full distance of the town dock (90 feet in length) and for a distance east of the dock of approximately 200 feet. All of the fast land beneath the blue shading and south of the yellow shoreline is filled land, where previously open water existed. Similarly, all of the green shaded area which was previously fringing mangrove wetlands is now filled land. The mangroves east of the green shaded area remain as they were in the earlier photographs. 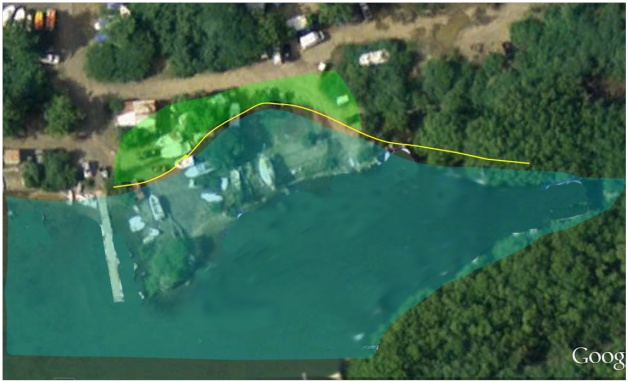 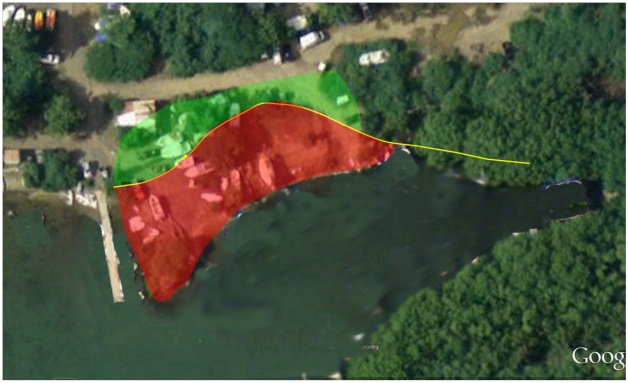 5. Contemporaneous Accounts of Illegal Fill Operations – 1973
We have also researched the archives of the Virgin Islands Daily News and located several news accounts of the illegal fill operation in 1973 and the government response in 1974. These articles identify the location, estimate the quantity of fill, identify the area as prime bird habitat, and indicate that the US Army Corps of Engineers was informed of the violation and involved in the response.
It should be readily apparent from the photographic evidence, the contemporaneous news accounts, and visual inspection of the materials in the fill location, that a substantial illegal fill of open waters and wetlands, amounting to a minimum of 0.5 acre of the creek, took place in 1973. 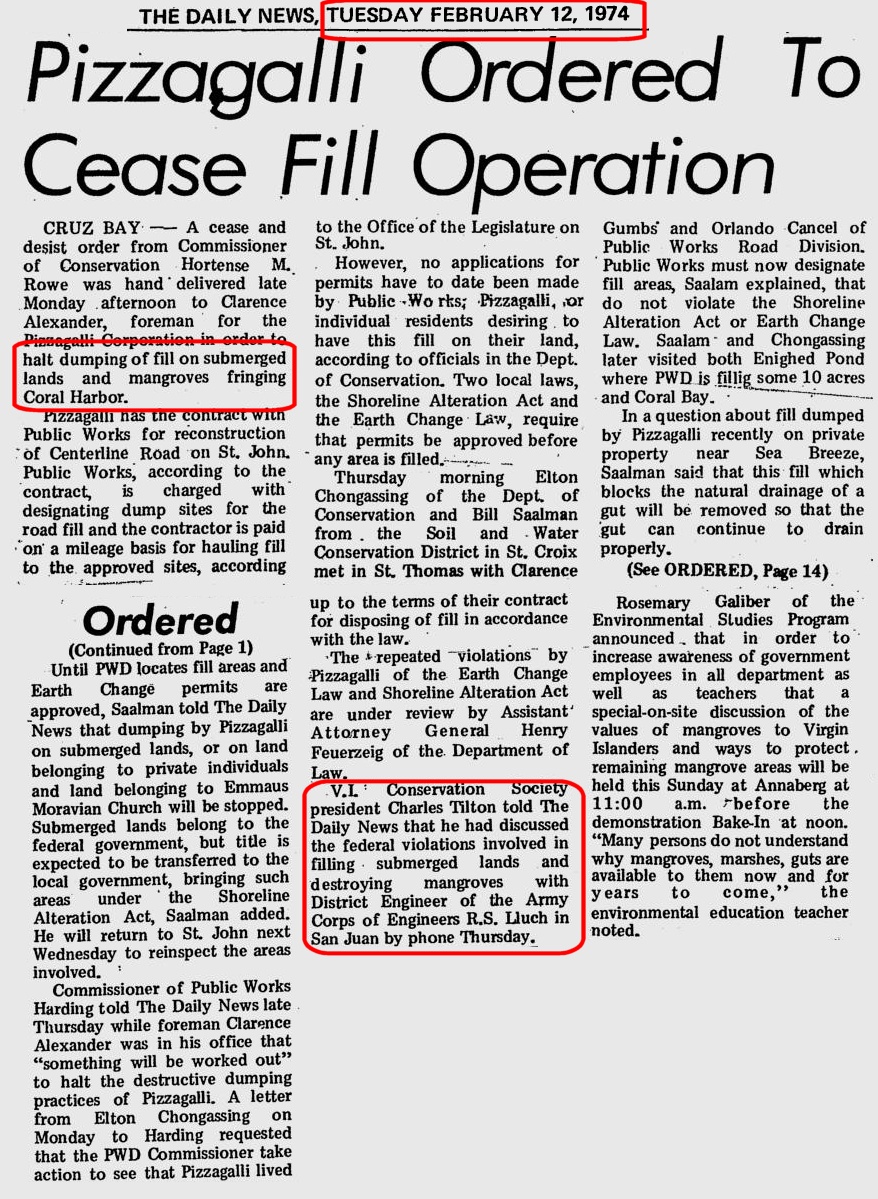 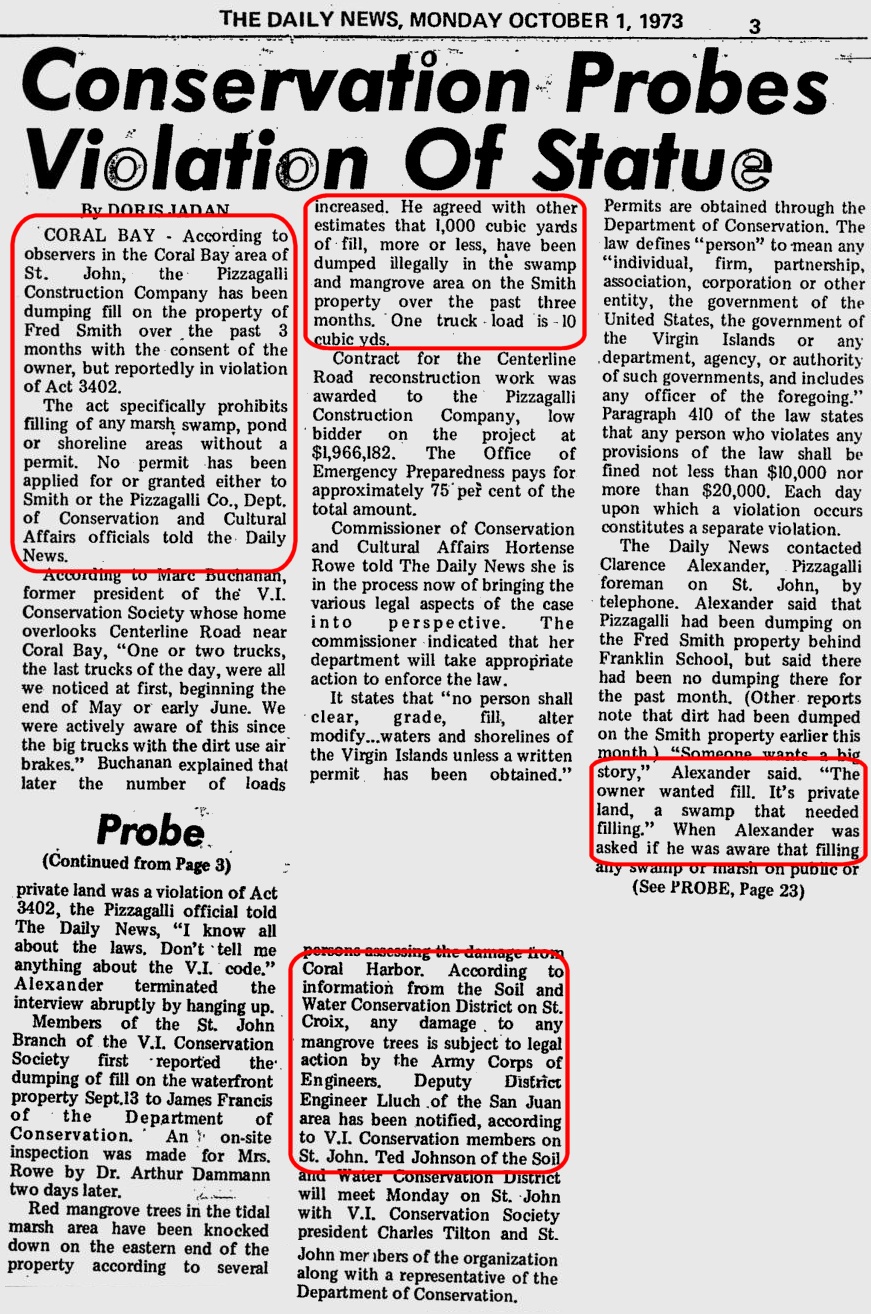 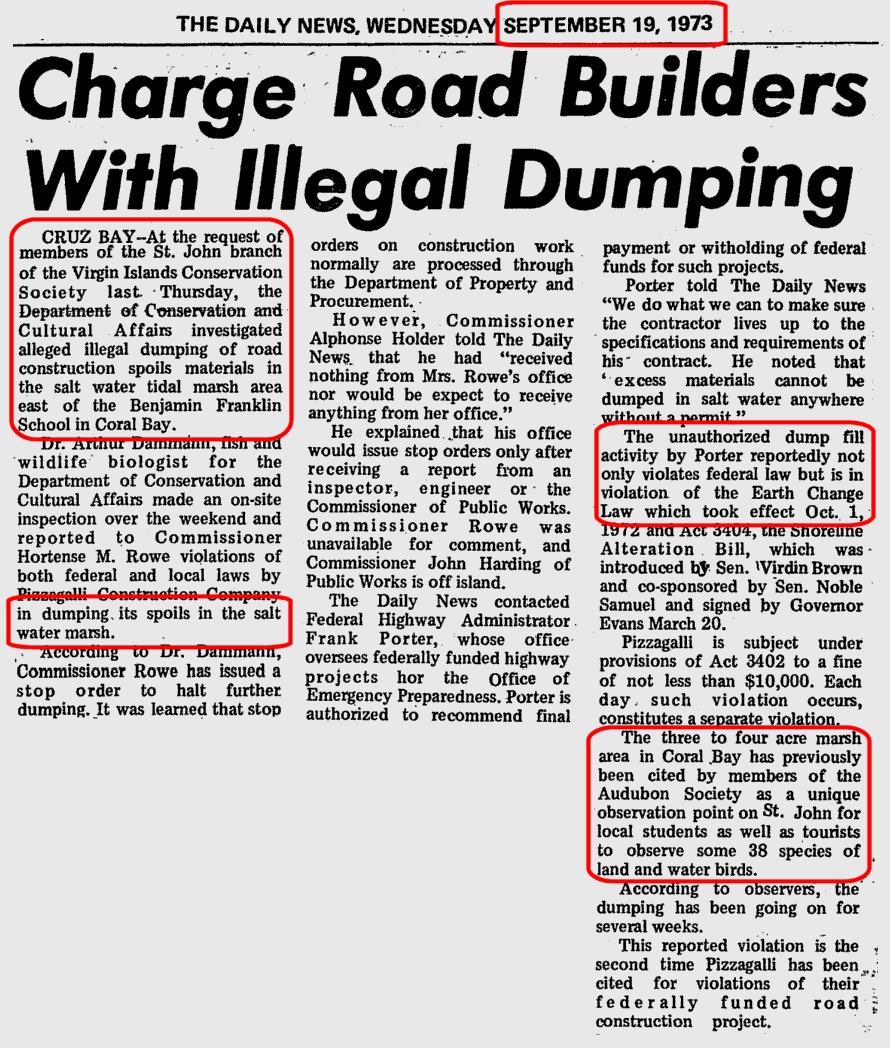 6. Cumulative Impact of Proposal by Sirius Marina to Fill Open Water and Wetlands
We now turn to the question of cumulative impacts. The proposed action by T-Rex St John would, according to the applicant, fill 14955 square feet of land below mean high water and an additional 6490 square feet of mangrove wetlands. The total acreage of filled aquatic resources amounts to 0.49 acre. 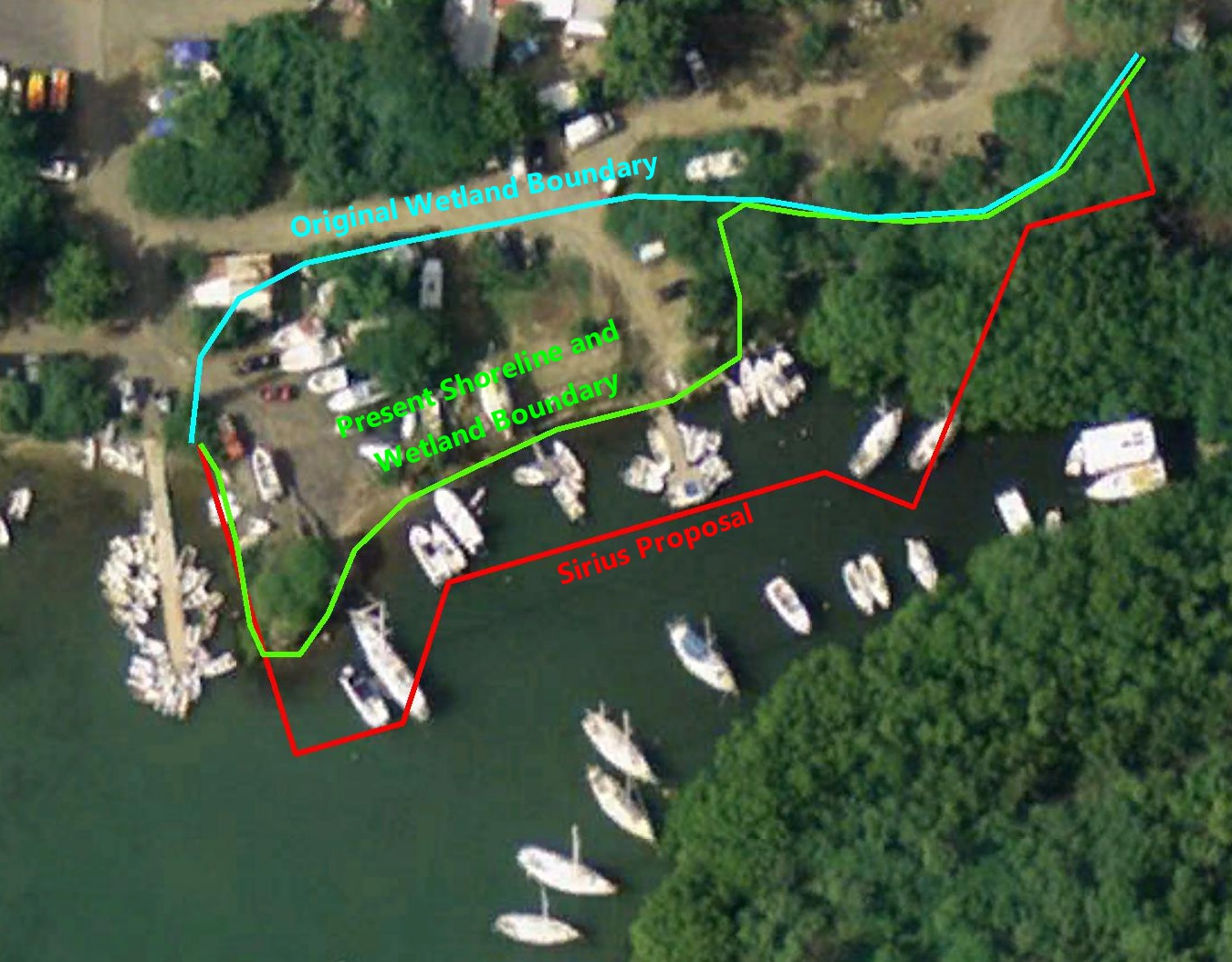 Figure 12: Cumulative Loss of Wetlands in the Creek

The proposal by T-Rex St John removes almost half the remaining open water of the creek, as can be readily seen in the illustration above. The easternmost portion is reduced to an extremely narrow waterway, and the mouth of the creek is a fraction of its original extent. This cumulative degradation of aquatic resource will have dire consequences on the entire ecosystem of the creek , impacting juvenile shark habitat, shoreline bird habitat, and mangrove wetland habitat. The secondary and indirect impacts have been discussed elsewhere, including cutting the primary seawater exchange channel with the adjacent salt pond and wetlands.

7. Conclusion
Although we believe we have demonstrated that the direct impacts of the proposed dredging and filling of the creek in Coral Bay are sufficiently extensive to require denial of the permit under NEPA, and the availability of practicable alternatives with substantially less damage to aquatic resources require denial of the Section 404 permit, we also believe that the cumulative impact of filling the creek, as demonstrated in this analysis, would warrant denial of the permit by itself. We believe this evidence is conclusive that the proposed activity would have significant, irreversible impacts to a critical aquatic feature of Coral Bay, which is itself an aquatic resource of national importance.