Coral Bay harbor is located on the southeastern shore of the island of St John, in the US Virgin Islands.  St John is the smallest of the three Virgin Islands, and has had far less development than its sister islands of St Croix and St Thomas.  This is largely due to the fact that almost 2/3 of the entire island is contained within the Virgin Islands National Park, and is totally protected from development activities. 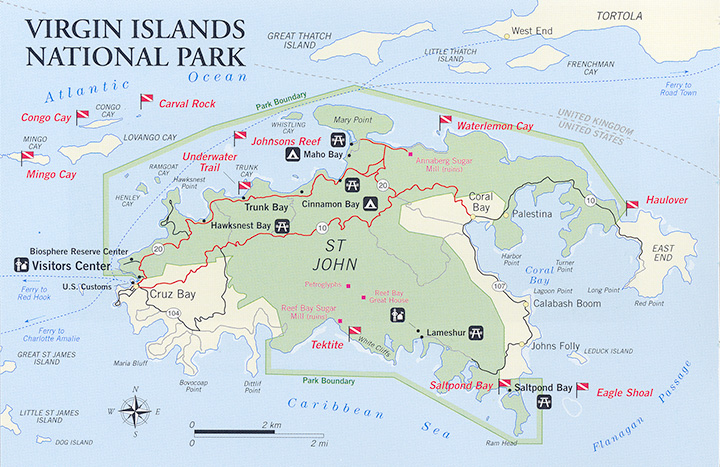 There are two residential areas of St John.  The only real city is the town of Cruz Bay, on the western end of the island.  This is the location from which the ferry boats that carry passengers to and from St John operate.  The other residential area is Coral Bay – not a town per se, but a residential district on the east end of St John.  There are no airports on St John.  In fact, there are no traffic lights on St John.   It is a small island, just around 8 miles from end to end, with a population of around 4,000.

Coral Bay harbor has been the commercial center of the East End of St John for centuries.  But “commercial” in Coral Bay is really a misnomer.  Other than very limited agriculture and tourism, there really are no other substantial commercial activities in the area.  Most people either work in the tourism industry, or are self employed as artisans, builders, or tradespeople, or they work in Cruz Bay or St Thomas.  So the harbor itself has never been used for heavy commercial purposes.

Directly adjacent to the waters of Coral Bay is one of the jewels of the Caribbean – the crystal clear waters of Hurricane Hole.  Surrounded entirely by lands of the Virgin Islands National Park and thick stands of fringing mangroves, Hurricane Hole is a thriving nursery for endangered corals and fish and shellfish of countless varieties.

Next:  The Natural Environment of Coral Bay Harbor